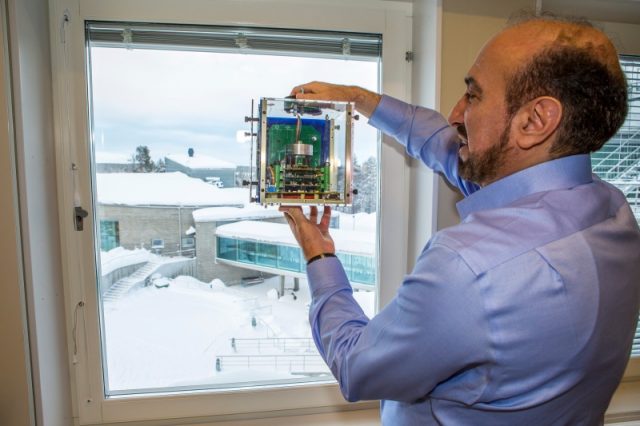 The Swedish miniaturized satellite that is built and developed at Luleå University of Technology in collaboration with Open Cosmos, has been launched into space. After a stop at the International Space Station, it will soon be in orbit in the thermosphere.

– We will boost new frontiers of scientific research on this rather unknown portion of our atmosphere, says Reza Emami, professor of Onboard Space Systems.

One week ago, the Orbital ATK Cygnus cargo craft, took off from Cape Canaveral Air Force Station in Florida. Last Saturday, the spacecraft docked according to plan with the International Space Station, ISS. The craft will deliver about 3 500 kilos of cargo to ISS, such as crew supplies and station equipment. But also, the spacecraft carries 28 cubesats, one of which is from Luleå University of Technology and the research group of Onboard Space Systems, in collaboration with the UK-based space company Open Cosmos Ltd. This collaboration is a good example of strengthening the academia-industry ties in the Space Industry.

– All the cubesats have been transported to ISS and will now be stored in the ISS cabin, says Reza Emami.

– At an appropriate time in about two weeks, the cubesats are taken out from the station’s cabin and checked by the onboard crew. After that, the cubesats will be deployed and released to its designated orbit by the Japanese Experiment Module Robot Manipulator System (JEMRMS).

For the research group of Onboard Space Systems, this is the first important experience of a full cycle of design, development, fabrication, integration, test, deployment and – hopefully – operation of a miniaturized satellite.

– Through this project we have been able to form a network of international collaborators for our future research. Researchers and students in our group have found a unique opportunity of having hands-on experience with real-world, international space projects, says Reza Emami.

The cubesat from Luleå University of Technology is part of the QB50 mission, a project whose purpose is to obtain a broad range of data in Earth’s largely unexplored lower thermosphere in order to enhance the existing atmospheric models. It is also a demonstration of technologies for multi-point, in-situ measurements utilizing miniaturized satellites.

A cubesat is a miniaturized satellite, a square satellite that measures ten centimeters and weighs one kilogram. The cubesats used in the QB50 project are so called double-or triple-unit cubesats; they consist of two or three cubesat units and weigh two to three kilograms. This means there is more room for modules and payloads (the measurement devices). After being launched from ISS, the 28 cubesats are supposed to work together in harmony, i.e. having coordinated orbits, motions and maneuvers. This cluster of satellites creates an opportunity for more extended measurements in space.

– All QB50 cubesats will be orbiting at an altitude of between 200–380 kilometers, in the thermosphere, which is the least explored layer of the atmosphere. Earlier atmospheric explorers have been carrying out experiments for single-point, in-situ measurements, but the time spent in the region of interest was only a few tens of minutes. The QB50 cubesats, including ours, will provide multi-point, in-situ measurements for a time period in the order of four to eight months, says Reza Emami.