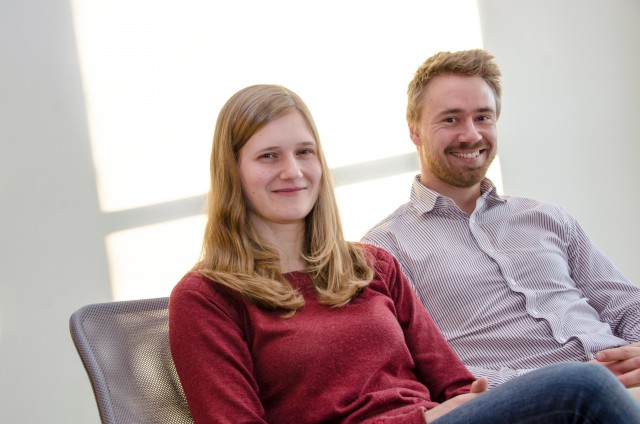 Angelica Löfberg and Christo Dordlofva are two of eight innovation Ph.D. students within the RIT project.

3D-printed components for rocket engines will become a reality in the near future. Research at Luleå University of Technology is therefore investigating which innovation system that can support this and what the design process should look like.

– Rocket engines are manufactured on a small scale which means that you have much to gain from additive manufacturing, known as 3D printing, says Angelica Löfberg, PhD student in Product Innovation at Luleå University of Technology.

Manufacturers in the aerospace industry have so far used traditional methods where parts to each rocket engine component are for example casted individually in specially designed moulds and then assembled. It implies a complicated and long process which becomes very costly for a small-scale production. The casting process also has limitations that give restrictions on how the components can be designed. In addition to this, there are also strict regulations to follow. Overall, this can lead to creativity and innovation being inhibited.

– With 3D printing, we have much more freedom to decide exactly how we want the component to look like. It is manufactured in one piece and it only takes a few days. You can print a prototype, test it, make changes and print a new. It brings design freedom, shorter lead times and ultimately reduced cost, says Christo Dordlofva, PhD student in Product Innovation.

Behind the project is GKN Aerospace that manufactures rocket engine components for the European launcher Ariane 5. The company manufactures both turbines to fuel pumps and nozzles (end cone at the bottom of the engine that accelerate the exhaust gases for increased thrust), both of which consist of several parts.

The parts that are suitable for additive manufacturing are about 20 to 50 centimetres in diameter and it is some of these that the company wants to develop specifically for 3D printing and print. It is made in a process where powder from, for example, Titanium, Aluminium or different Nickel based alloys is fused together layer by layer, and gradually builds up the part.

The first stage of the project focuses on parts with a static function since rotating parts are more critical. GKN components are used in rockets intended for unmanned spacecraft such as satellites. All production and assembly is made on the ground.

The new technology requires new work processes. Christo Dordlofva and Angelica Löfberg hope to be involved in setting new standards in a still quite immature, but hot and expansive industry. Christo Dordlofva will concentrate on the design process and how to qualify the products. Angelica Löfberg will study which innovation system that is required for additive manufacturing.

– My work is about to find out how GKN Aerospace ensures that ideas are created, captured and put into use, and generally how an innovation environment for space is created. How should you think to come up with something that is beyond what other companies produce, says Angelica Löfberg.

– On the US market, NASA and SpaceX among others are working with 3D printing and have tested various components in ground testing. Non-critical parts have also been used in real applications. It is a big step to print the critical components that GKN Aerospace has. But if Europe is to be competitive, we must embrace this new technology, says Christo Dordlofva.

RIT stands for space for innovation and growth, and is a major investment in a total of 37 million. RIT is run in collaboration between Luleå University of Technology, LTU Business AB and a number of regional and national space actors such as the Graduate School of Space Technology.