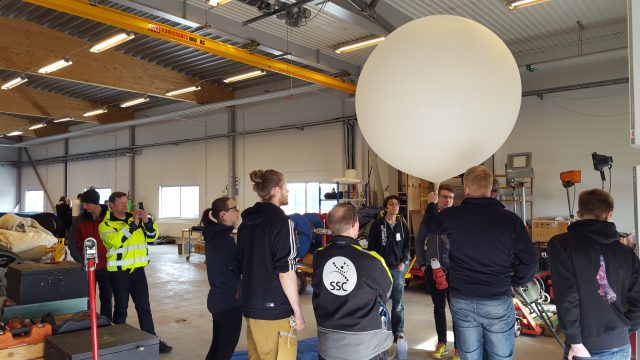 Students from Luleå University of Technology might work at Esrange SSC during summers.

SSC Esrange in Kiruna and Luleå University of technology collaborates in a preparatory training to find and train students for a possible summer replacement at Esrange.

Every summer SSC Esrange in Kiruna searches for four to six qualified summer workers to temporarily replace staff and this year they tried a new approach.

– Usually it is a long process to find and train summer workers and summer is short. We want to get a feel for the people who come to work here so a preparatory education works really well, says Mark Kohberg, Manager for Range Instrumentation at Esrange SSC.

During the preparatory course the sixteen students visited Esrange SSC on four occasions and gained insight in how work at the space base is conducted. One element consisted of building their own experiments and then organize and fly the best-built unit with a small balloon. After handing out the diplomas all of the students had a chance to speak privately with the heads of the respective departments at SSC Esrange.

– The course at Esrange was very rewarding. It is a good opportunity to see how a large company in the space business works and what tasks will be expected of us after graduation. The icing on the cake were the practical steps we made that led to the launching of the small balloon, said Hannah Petersson, one of the graduate students at Luleå university of technology.

Luleå University has in recent years invested 100 million SEK  in Space Campus in Kiruna which means 20 new positions in an aim to enhance space activities in Kiruna. Two new chaired professors has been recruited, Professor Javier Martín Torres in Atmospheric Science and Professor Reza Emami in Onboard Space Systems. The university is also the main partner in the RIT-project alongside with LTU Business where the project goal is about consolidating and increase collaboration between space industry and academia in order to stimulate growth in the space business.