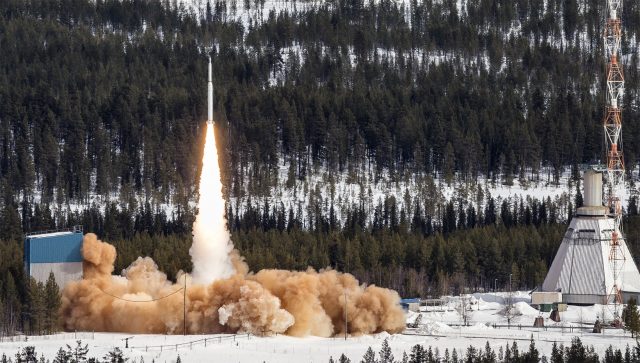 A recent study estimates that the space cluster in and around the city of Kiruna in northern Sweden could double in size to reach a total of 50-70 actors and 1,000 employed in 10-15 years. The conclusion is based on an analysis of the cluster’s recent development, its location and conditions, as well as on global trends in the space industry.

The study was initiated and financed by the regional space development program RIT2021, which involves all major space organizations in northern Sweden, and carried out by the business development agency LTU Business. The aim was to estimate the expected growth of Sweden’s northernmost space cluster over the coming 10-15 years.

Johanna Bergström Roos is project manager for RIT2021. She describes the general development of the space industry:

– New technology enables easier and cheaper access to space, transforming the industry from having been exclusive to expensive national initiatives to becoming a market for virtually anyone and everyone with interest and ambition. This enables the space sector to expand both academically and commercially, and creates opportunities for small businesses to contribute, compete and grow in it.

Study results
Given the conditions and the recent progress, and when compared to other nations and space clusters, the study estimates that the Kiruna space cluster could grow to double its current size in just 10-15 years, reaching twice the number of organizations and people employed. LTU Business, who carried out the study, expects a healthy growth of additional startups as well as more mid-sized companies and possibly another tier 1 company seeking to establish themselves in the area.

Three key strengths
The study highlights three key strengths when assessing the space cluster’s potential: the location, the infrastructure, and the already established ecosystem of actors.

The region is huge, 150 000 square kilometers, and sparsely populated. It provides a big unpopulated testing and impact area with very little air traffic, which is rare in Europe. The northern location at 67°N makes it favorable to launch and communicate with polar satellites and to study space and atmospheric phenomenon such as northern lights.

Despite the size of the area and how sparsely populated it is, the infrastructure is well developed. The Gulf Stream makes the weather mild and there are cities with airports and public transportation. The region provides opportunities for new establishments and expansions, in cities like Kiruna and elsewhere in the region.

Finally, the space cluster has a well-established ecosystem of organizations and international collaboration. With big actors like the Swedish Institute of Space Physics, the Swedish Space Corporation and Luleå University of Technology there is already advanced test, research and launch infrastructure in place.

There is a strong academic foothold including research, master and PhD programs, and a space high school as the starting point in space education; there is a strong industry sector and startup scene, and multiple business supporting actors like the European Space Agency Business Incubation Centre and Aerospace Cluster Sweden, a network for developing small and medium sized enterprises.

– Close collaboration between academia and businesses helps us maximize the impact of research, and to provide education that meets the current and future needs of the industry, says Olle Norberg, vice rector for space technology at Luleå University of Technology.

– The new testbed provides a platform for the European and global space sector to develop next generation rocket technologies, and the needed infrastructure for launching small satellites. Sweden will become a launching state, providing a capability of great importance for research, technology development and expanded international collaboration, says Stefan Gardefjord, CEO at the Swedish Space Corporation.

Both the government-owned Swedish Institute of Space Physics and Luleå University of Technology have opened their test infrastructure and expertise to external users, and the university last year became part of UNIVERSEH, five European universities partnering in space research and education.

The last few years have seen numerous new startups as well as existing companies branching into space products and services in northern Sweden, and the two German rocket manufacturers Isar Aerospace and Rocket Factory Augsburg have recently established operations in the area.

About the study
The study was financed by the regional space development program RIT2021 and conducted by analysts Alexander Bergström and Johanna Vesterberg, who work for the business development agency LTU Business.

The research material was produced mainly through interviews and secondary research. Comparisons to other nations and space clusters included the UK and Luxemburg, and the Harwell and HEGAN space clusters.