Successful collaboration between space and mining in Kiruna 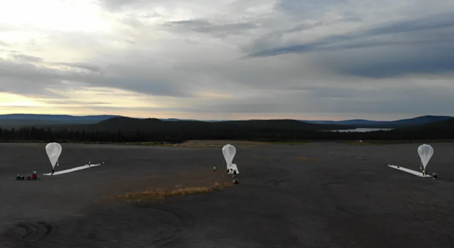 The Institute of Space Physics (IRF) and Esrange Space Centre (SSC) have, for the first time ever, enlisted the help of a mining-related company, LKAB Kimit, to carry out measurements during experiment carried by balloons. The flights were made for the purpose of measuring infrasound created by a surface explosion. The experiment aimed at improving infrasound detection capabilities of meteoroid entries and other atmospheric phenomena.

– At RIT2021, we work hard to get regional players to collaborate, to develop the space industry and create new opportunities for innovation and growth, says Olle Persson, work package leader at RIT2021.

A total of three blasts were carried out at the mining area in Mertainen within a time frame of ten hours. In parallel, three of IRF’s experiments on three different balloons took off from Esrange Space Center. Also sending three balloons at the same time was done for the first time, which testifies to a launching facility with world-class expertise.

The infrasound experiment is led by Johan Kero at IRF. Here you can read more about his research here.

– We see that meetings between different actors are an important component for competence and knowledge transfer. New thoughts and ideas are often created, which in the next step can lead to innovations that in various ways benefits society, says Johanna Bergström Roos, project manager for RIT2021.

Another area where mining and space meet is when satellite images are used for exploration of new mining deposits or to monitor soil deformations around a mine. We will have reason to return to this topic in a later article.